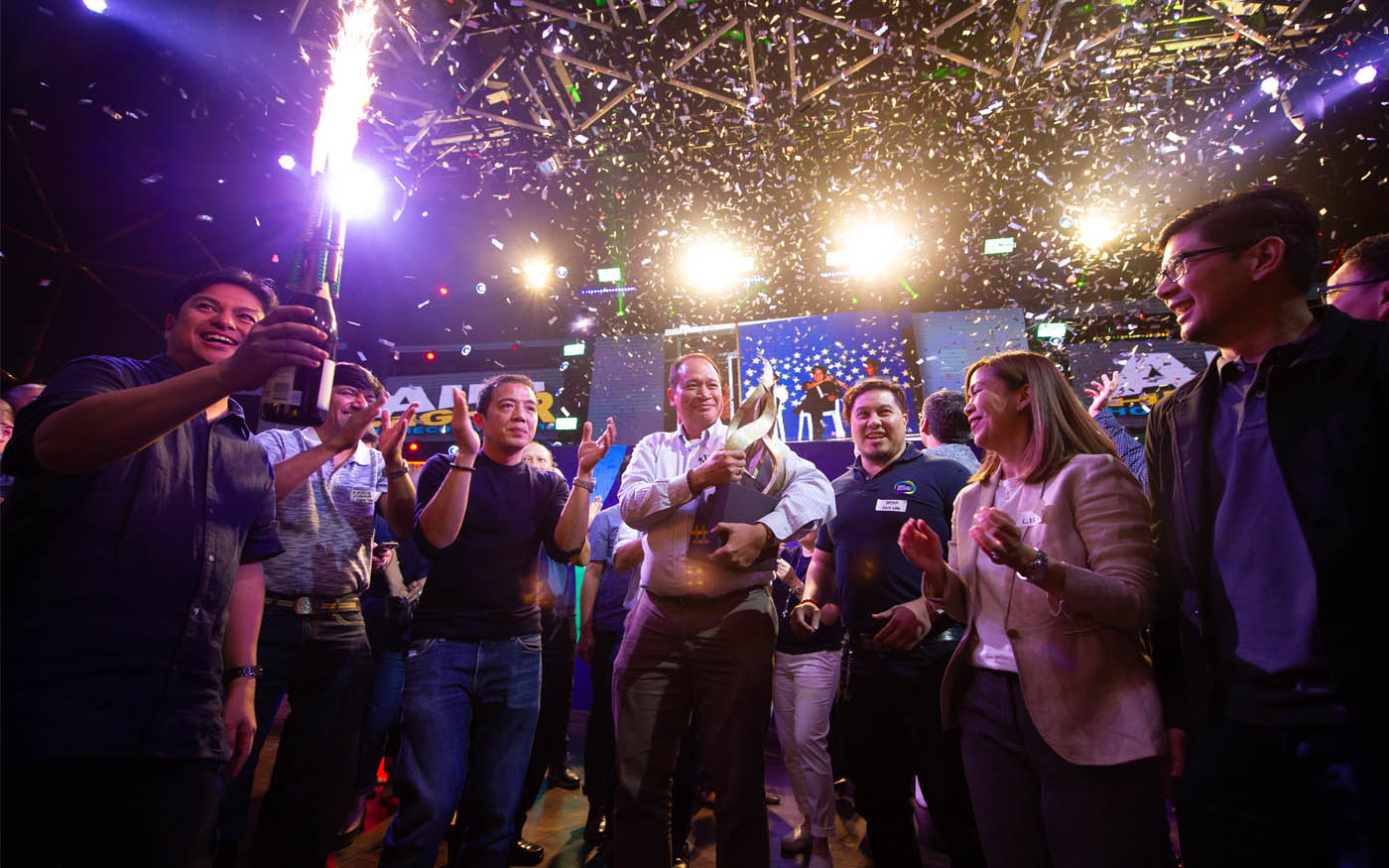 Everyone was in a festive mood as alumni flocked to XYLO at the Palace in Bonifacio Global City for the 2019 AIM Grand Alumni Homecoming. Led by the host class of MBM 1999 and the other celebrating classes, the atmosphere was electric, as old classmates gathered and excitedly swapped stories about their life at AIM and after.

As with any homecoming, the alumni were thrilled to socialize with classmates they haven’t seen in a long time, especially those from abroad. As Homecoming Chairman Mr. Allan Tuazon aptly mentioned in his speech, “…let’s make tonight a time to rekindle and reminisce the life-altering moments we spent in AIM.”

The host class prepared a sumptuous spread, with generous selections for both meat lovers and vegetarians alike. While everyone was enjoying dinner, guest singer Rina del Rosario serenaded the alumni with hit songs from the 60s to the 90s.  At the same time, dance instructors lured some shy alumni down onto the dance floor to party it up.  In an instant, many were seen having a great time dancing and jiving to the music, including officers of the different alumni chapters all over the world.

One of the celebrating batches, MBM 1974, prepared a dance number and a video reel of their priceless memories together, marking 35 years of friendship and camaraderie. Their performance concluded with a moving duet of Endless Love by singer Rina del Rosario and batch member Mr. Roberto ‘Bert’ Manabat, chairman of KPMG R.G. Manabat and Co. and one of the winners of the Triple A award for 2019.

MBM 1974 during their performance

Mr. Bert Manabat (MBM 1974) and Ms. Rina Del Rosario serenading the alumni and guests with their own rendition of “Endless Love”.

Ditto with the host class as they all danced on center stage to 80s music and showed old photos of their fun memories in AIM through a video presentation.

MBM 1999 during their group performance

A highlight of the evening was the awarding of special trophies to the winners of the alumni donation competition held by the Alumni Relations Office (ARO) and the Scientific Research Foundation (AIM-SRF).  In a show of force, MBM 1973 swept all three categories, namely: Largest Batch Donation, Highest Percentage of Batch Participation and First Batch to Achieve 100-percent Participation.  Chairman of the Board Peter Garrucho and President and Dean Jikyeong Kang handed out the awards to members of the MBM 73 class.

A night to remember

Special guest DJ John Robinson kept the party going with his thumping mixes of 70s to 90s dance hits.  It was a sight to see alumni let loose and line dance in a show of camaraderie and unity.  It seemed like they could keep at it for hours and DJ John was just too happy to oblige, spinning hit after hit that kept the crowd on their feet all night long.

DJ John Robinson during his set

It was indeed another momentous homecoming to remember.  Homecoming chairman Allan Tuazon and his MBM 1999 classmates pulled out all the stops to make sure everyone had a grand time.  As the symbolic flame was passed on to the next host class of MBA 2000, many were heard making plans to see each other again next year.  We wish MBA 2000 great success as they host the next grand homecoming in February 2020.

We’d like to thank all alumni and guest for joining us in another successful homecoming night. Also, congratulations to MBM 1999!