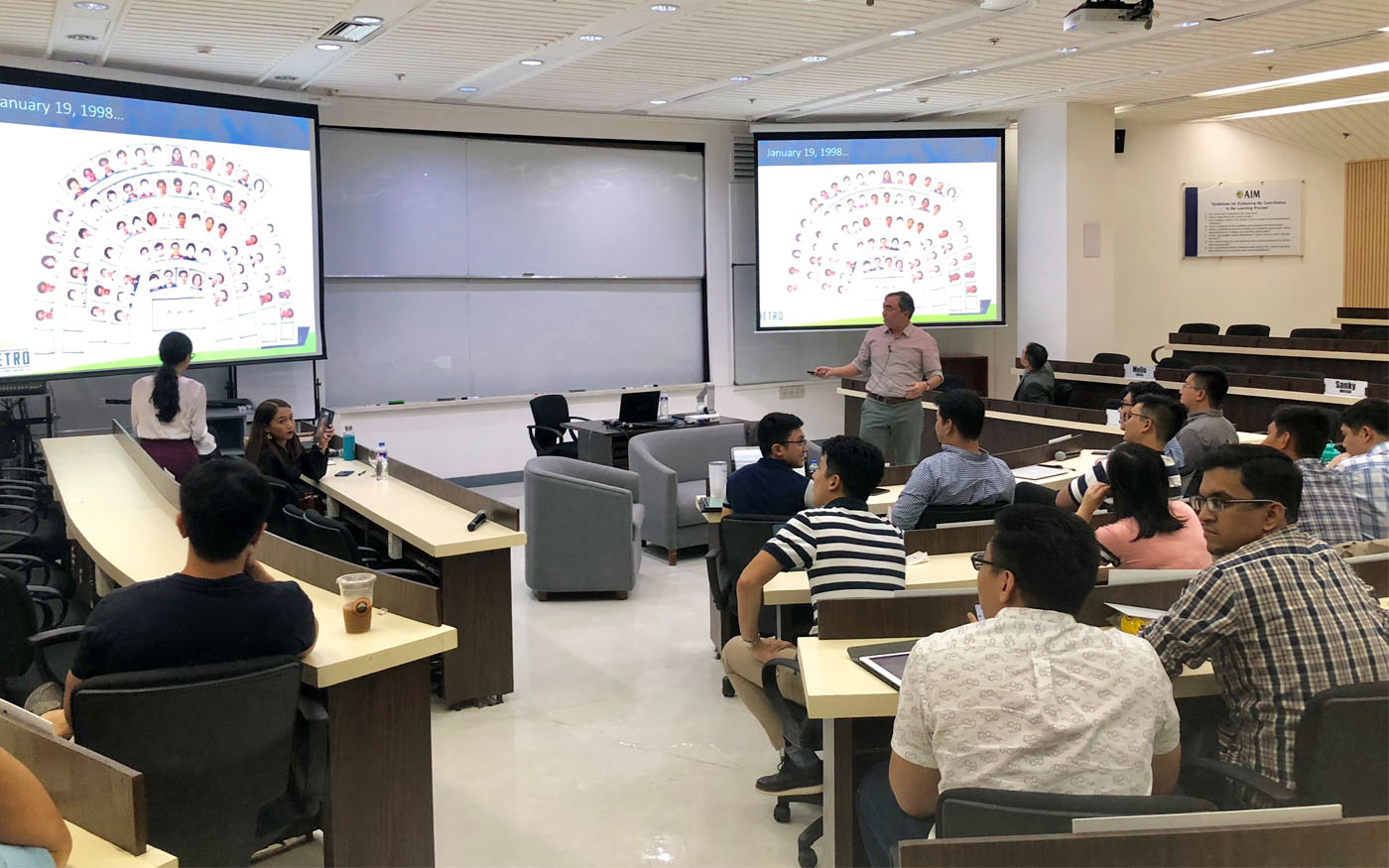 Four months into his new role as President and COO of Metro Retail Stores Group, Inc., Mr. Manuel Alberto (MM 1998) returned to AIM to give an inspiring Alumni Hour talk to the class of MBA 2019.  He recounted his excitement as he showed the invite for the talk to his wife, prompting her to aptly articulate that his AIM journey has finally come full circle.

Mr. Alberto captured the attention of his audience right off the bat as he began his talk with a photo of his class’ seating plan, dated January 1, 1998.  It was almost comical and crude, compared to today’s standards.  However, it fully symbolized the beginning of his AIM journey, culminating with his graduation from the Master in Management program a year later.

He recalled the discipline inculcated in him by the program, borne out of the need to analyze three cases every day, with countless other readings and projects thrown in for good measure.  He called this “The AIM Effect”, which he was able to put to good use in jumpstarting his career in retail marketing.   From his own experience, the AIM Effect produced four important life lessons:

Life Lesson #1: Make your mistakes in your 20s

Mr. Alberto said that the early 20s is the critical stage in establishing one’s career path as it offers the perfect opportunity to take risks and learn from it.

He shared that as he was completing his college requirements, he received offers to work either as a production assistant in a local tv station or as a management trainee in a mid-sized retail company with better pay and a working visa in the US. He, of course, chose the latter and thus started his career in the retail industry.

Life Lesson #2: Make the most out of your AIM experience

In his first few months in the MM program, he set a personal goal to be in the top three of the class. He started out as a very competitive student, thinking it was the only way to achieve his goal.  But being overly competitive meant he was always under a lot of stress such that he realized he wasn’t making the most out of his AIM experience.

He quickly learned it was better to collaborate, and described the teamwork within his Can Group (known as Learning Team these days) as the best learning experience.  Mr. Alberto mentioned that because of his Can Group and the daily discussion of cases, he developed a holistic and strategic approach in his decision-making. This he found very useful in climbing the corporate ladder.

Mr. Alberto’s advise was for the students to savor and soak in the whole student experience whilst enrolled in the Institute and to get as much from it.

Mr. Alberto urged the students to map out their career plans early on and ask themselves “where will I be 20 years from now?”.  In his case, he researched the possible growth of the retail industry and the opportunities it could provide him. This greatly helped him strategize the next steps of his career.

Life Lesson #4: Build your Brand Story in your Curriculum Vitae

According to Mr. Alberto, building one’s brand story is not just about a person’s career objective or career experience.  A brand story pertains to your own personal characteristics that set you apart from other individuals who may just as be, or more, qualified.

He advised the students to work smart and build their outstanding brand story. Citing his own  experience, he established his career in retail when he joined MAKRO’s operations division.  Down the line, he joined a start-up retailing company, Rustans Supercenters, Inc. Here, he was able to apply everything he learned in operations and immersed himself in merchandising and marketing functions. Learning all he could, he then joined Jollibee Foods Corporation, a company well known for franchise and brand development.

Armed with acquired knowledge and experiences in the different facets of retailing, he took the challenge to establish Family Mart, another start-up company.  After hurdling this challenge, he became inspired to learn another aspect of retailing using an innovative channel, which brought him straight to Avon and the world of direct marketing.

All his experiences in every aspect of retailing brought him renown as the quintessential Professional Retail Executive in the industry, a citation very few have here in the country.

In concluding his talk, Mr. Alberto imparted two important bonus lessons.  The first is to develop the ability to execute your strategy, and the second is to stay humble. He advised the class to always listen and allow themselves to learn.

An inspired MBA 2019 took the opportunity to participate in a lively question and answer immediately following his talk.

We would like to thank Mr. Manuel Alberto for sharing his valuable time with the class of MBA 2019.  His career advice and life lessons certainly left a very positive mark on the students.  The students truly appreciated the lessons coming from a C-suite perspective.

Thank you, Manuel, and we hope you can indulge us in another Alumni Hour soon!