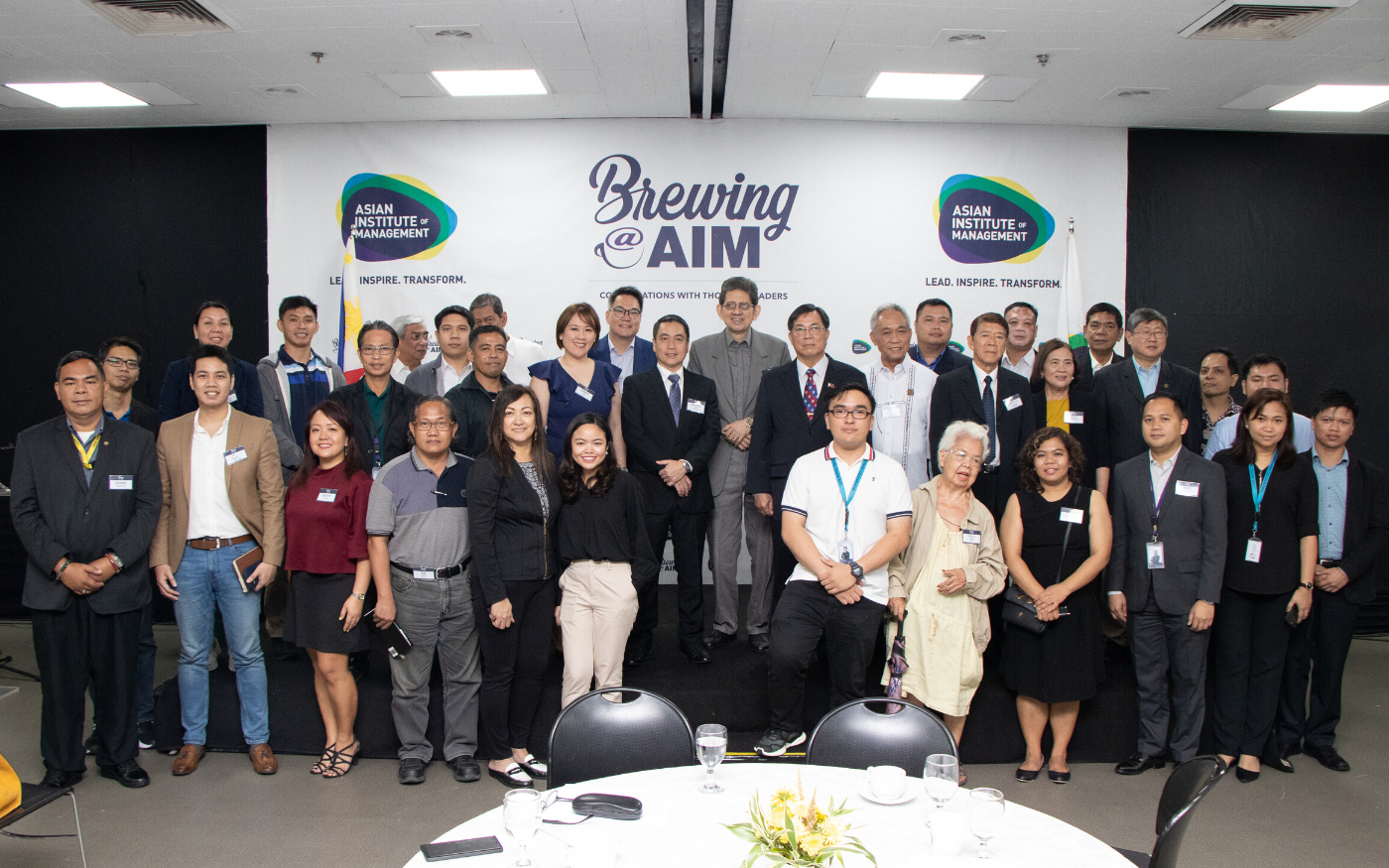 For the September 2019 Brewing@AIM session, we had the privilege to hear Undersecretary of National Defense, Gen. Cardozo Luna talk about the government’s initiatives in safeguarding the Philippines, particularly with regard the current issues in the West Philippine Sea.

Lt. Gen. Cardozo Luna is a retired three-star general and has served as the 35th Vice Chief of Staff of the Armed Forces of the Philippines. He was appointed by President Rodrigo Duterte last 2016 as the Undersecretary for National Defense.

Before he discussed the policies and initiatives of the Department of National Defense (DND), he thanked his mentors and Philippine Military Academy upper classmen, Generals Edilberto Adan and Rufo de Veyra, both AIM alumni, who were present at the breakfast forum.

Usec. Luna began his speech by quoting Harvard Professor Graham Allison, “Never before in history of mankind has a nation risen so far, so fast…”. He explained that the statement of Prof. Allison is about China’s eminent upsurge in power that may result in consequences not only to its neighboring countries but the whole world.

Focusing on China’s progress, it is widely expected to become the largest economy in the world by the middle of the 21st century. As a result, this has created a new balance in economic power especially in East Asia. With its newfound wealth, China was able to expand its military and naval resources. And this has certainly affected what we currently experience in the West Philippine Sea.

Matters on the West Philippine Sea

At the time of the forum, there were hundreds of Chinese militia vessels occupying portions of the West Philippine Sea. In response, the United States and key allies now project a naval presence in the said area to protect freedom of navigation right This also allows them to limit China from occupying neighboring territories.

The United States has also reached out to China for a discussion about the presence of its conventional and non-conventional para-military forces on the West Philippine Sea. He described the current situation as “like a game of chicken with no clear resolution in the horizon.”

During his talk, he shared significant initiatives that the government is doing:

The DND stated that they have re-opened communication channels with China while maintaining strong connections with the country’s allies. He shared that the issues regarding the wrecked fishing vessel that happened in early 2019 alarmed the Department. They have reached out to China through diplomatic channels, expressing the government’s displeasure about the recent event in the West Philippine Sea.

“Art. II Declaration of Principles and State Policies Section 7. The State shall pursue an independent foreign policy. In its relations with other states, the paramount consideration shall be national sovereignty, territorial integrity, national interest, and the right to self-determination.”

In his closing statement, he mentioned that stability in the West Philippine Sea and broader South China Sea is pivotal to the peace and prosperity of the Indo-Pacific region. He also stated that through an independent foreign policy, we will be able to deploy smart power, namely, a dynamic policy which combines proactive engagement vis-à-vis China and strengthening our capacity for territorial defense and maritime defense awareness.

Usec. Luna reminded the audience that the current situation in the West Philippine Sea should not cause panic to Filipinos, rather, it should promote strategic innovation and patriotism. He assured the attendees that the DND and AFP are doing everything to protect our national interests.

Our breakfast forum patrons proved to be very inquisitive when it came to the question and answer portion.  Usec. Luna was very much equal to the task and the audience appreciated that he was forthcoming with his responses.

We would like to thank our speaker, USec. Cardozo Luna for the very interesting talk and vibrant discussion with our alumni. Also, we thank our Brewing@AIM alumni patrons for continuously supporting our breakfast forum. We hope to see you at the next one!

Usec. Luna with the Brewing@AIM team