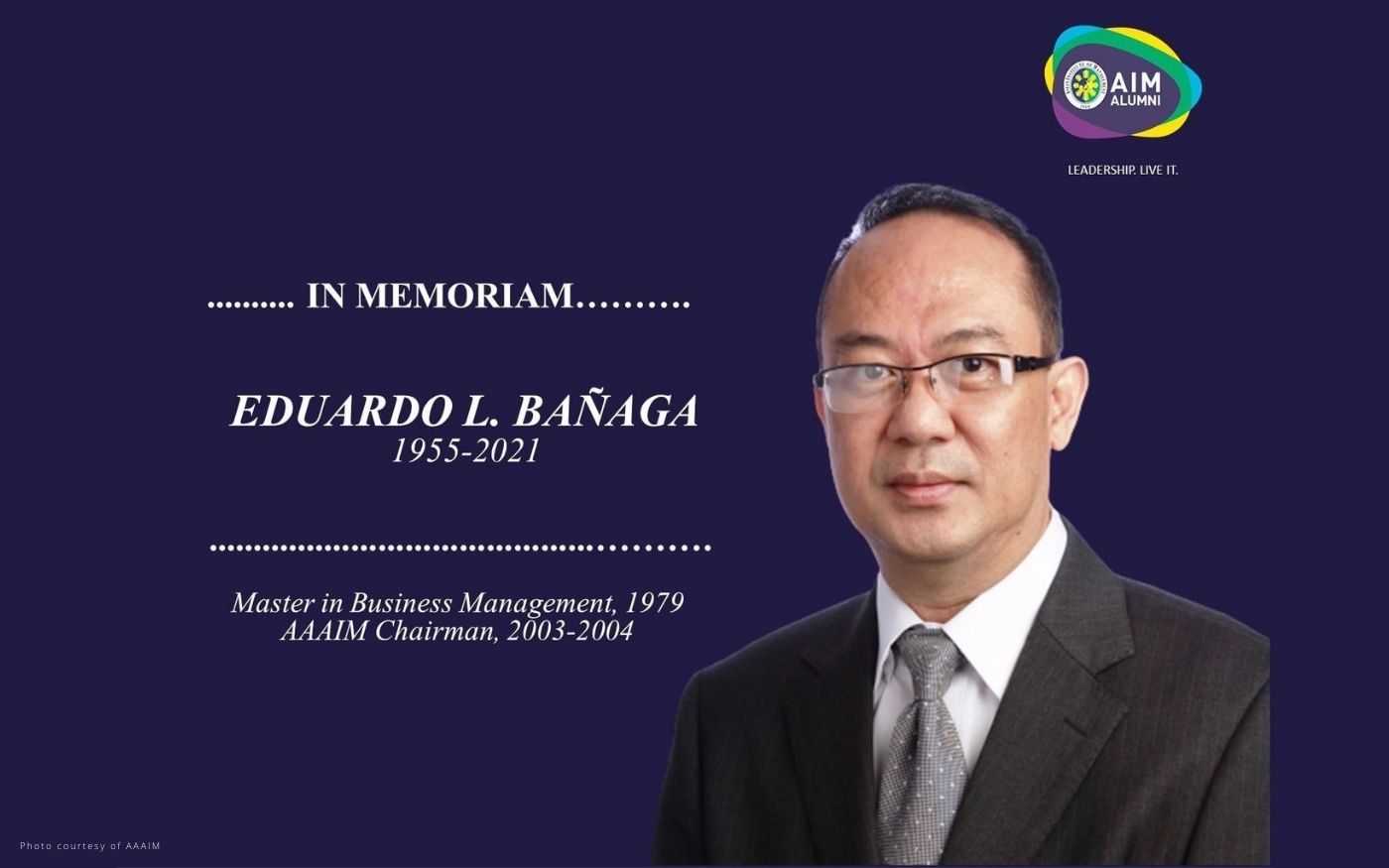 Once in a while in a lifetime, we meet someone who becomes a best friend. Finding and keeping that best friend for life is a grace, an unexpected gift. That’s Ed Bañaga to me, an AIM classmate who was one of God’s choicest blessings.

Like two peas in a pod, we both graduated with an Economics degree and leaned towards literary works and correspondence as well as the arts. As a collegiate editor, Ed was a prolific writer who wielded the pen so mightily that he can compose prose or poetry in a heartbeat. Most of all, I valued Ed’s counsel for he was like a wellspring from where insights and wisdom could be drawn whenever am faced with anything confounding. He was my so-called Life Coach.

Ed was a member of the tightly-knit group known as Hamburger Boys of AIM’s MBM79 batch. The other members are Louie Zamora, Monet Posadas, Singaporean Tay Chin Tong, Malaysian Abdul Majid Rais, Malaysian Amir bin Harun and the late Roel Ramirez. A Thai classmate, Mui Dilokwanich-Kaewkoon, and I are honorary members known as Hamburger Gals. Hamburger Boys’ bond began in 1977 but despite a span of over 40 years across four countries, their friendship flourished and they continue to laugh heartily at the same recycled jokes with familiar bravado during reunions.The group had this distinct connection hard to beat and was a model for Work/Play balance in the AIM arena.

In a blast from the past, Ed invited Louie Zamora and me to the introductory session of a transformational workshop known as The Landmark Forum. “It will change your life after this,” according to Ed. I was clueless about that Adulting 101 workshop (for lack of a better term), but Ed gives the Landmark Forum full credit for radically changing his passive nature and perspective in life. For one, it enabled him to come out of his shell and articulate his feelings. He revealed surprising even himself when he began verbalizing “I Love You” to his father, something he never did before as an adult. “Be complete with others,” became Ed’s mantra in this pivotal phase of his life.

As a second outcome of The Landmark Forum, Ed got emboldened to run for Chairman of the AIM Alumni Association which position, for decades, has been largely held by a particular MBM batch. I had reservations but the stance of Ed, who was inherently self-effacing, was borne out of a sincere desire to serve and introduce reforms. Despite all odds, he won. For the first time by the sideline, I witnessed Ed’s grit and management style in action. Under his helm, the alumni association’s organization was revamped, financial accounting of alumni funds was streamlined, projects benefiting the alumni network were executed. Together with a team of visionaries, he trailblazed AIM’s brand marketing. Ed became the first member of MBM79 to grace the cover of The Asian Manager, an AIM business publication, with a full cover story.

A true-to-form Servant Leader, one of Ed’s lasting legacies to AIM in his continuing service to his alma mater and the alumni network was a book entitled, “Taking AIM: Asian Management Breakthroughs”. This was a dynamic compilation of the insights and reflections of Asian leaders who have distinguished themselves in their respective fields of endeavor. As Overall Coordinator for this mammoth project, Ed dealt directly with a stellar list of Asian industry movers and shakers that included Malaysia’s Datuk Haji Sarip Bin Hamid, AIM Triple A Awardee from MBM79. With reverential awe, I marvel to this day at how Ed ably executed his business plan for an ambitious project that was initially met with much trepidation and very high expectations from AIM’s stakeholders.

Ed’s foray into the world of photography via the prestigious Camera Club of the Philippines (CCP) is another interesting facet of his life. He never failed to mention his Club sponsor, Lito Cruz (MBM79), for this hobby turned into passion and ultimately, in his words, his only luxury in life. In the Camera Club, Ed had a newfound, second set of close friends among members of the “Illuminati” batch with whom he traveled for photography expeditions. Ed wrote:

“I have very few close friends. Like Hamburger Boys and Girls that include you. I also have only a small group of friends in the Camera Club. No close friends from San Beda though I was to organize a class reunion before the pandemic.”

With a keen eye on spotting talents, Ed urged and encouraged Gerry Castro, MBM79 classmate, to join the Camera Club. Gerry recognized Ed’s guidance and claimed, “he always prodded and guided me like a Kuya in the CCP”. Likened to a father whose child graduated as Valedictorian, Ed was visibly euphoric when Gerry’s award-winning photo was exhibited in an international photography event in New York.

By nature, Ed was one kind soul who heaped praises on and celebrated the achievements of his peers. He was jubilant for Triple A Awardees from MBM79 like Mui Kaewkoon, Chun Jin Suk and Datuk Haji Sarip Bin Hamid. He lauded Eli Macasiray’s tedious efforts attendant to Marlon Young’s Triple A Award laurels. He often mentioned that the next Triple A awardee from MBM79 should be Lt. Gen. Eduardo Adan, citing the latter’s avowed principles and convictions and accomplishments within his realm.

Fast forward to 2020, the pandemic was no time to get seriously ill. And Ed was one of those who struggled with debilitating, painful health challenges amid precarious and trying times. Coming from a deeply religious family, Ed maintained a positive outlook owing perhaps to having a priest for a brother and as a former seminarian himself. With his innate spirituality, Ed accepted God’s will for him at the onset even as he was anchored in hopeful prayers. Ed wrote to me in July 2021:

“I take each day one at a time. Sometimes I wonder whether a sudden passing is better than a lingering illness. What I am certain is that we chose everything in life, including our trip to God’s embrace, but of course with His guidance and through His unconditional love.

Each day is a bonus. There has to be a reason why I am given another day. Prayers sustain me. I pray for all those who remember me in their prayers like you.”

“May God’s grace, love and mercy be yours all the days of your life. Today, don’t simply thank God for the many blessings you have received. Thank Him also for He has chosen you to be a blessing to others like me. Happy Birthday, Ed!”

That birthday was also the last time I heard from Ed for he was called by our Divine Creator to eternal life within a matter of days. With his sudden passing, I believe God answered Ed’s fervent prayers and put an end to his agonizing physical pains. In life and in death, Ed continues to be an inspiration and blessing to those graced to meet him, to know him well and to journey faithfully with him.