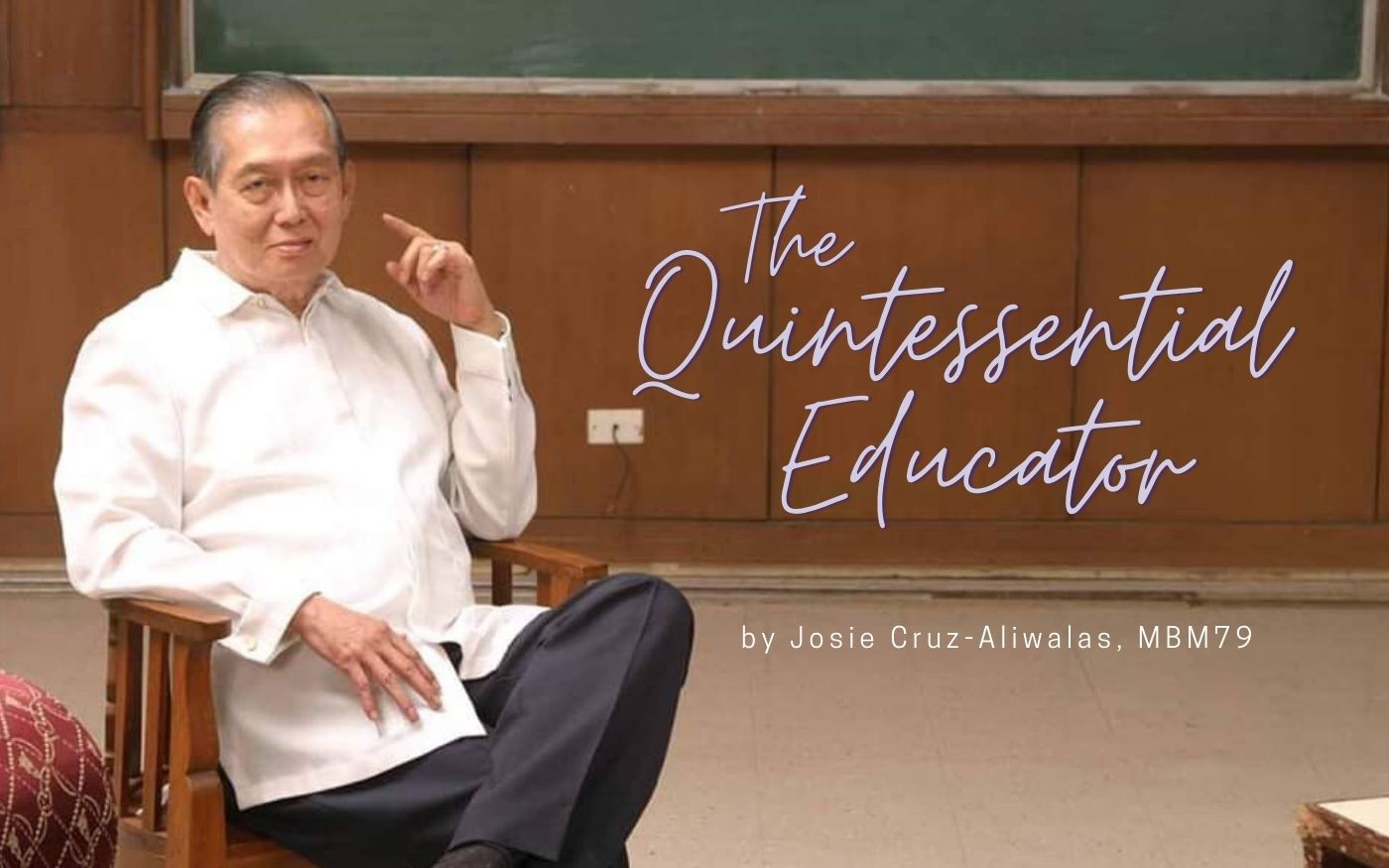 It is with honor and pride that I claim to have practically grown up and matured, both in my professional and personal life, at the Asian Institute of Management (AIM).  All because of one great teacher in the person of AIM’s former Dean Francisco P. Bernardo, Jr. Apart from our parents, it is our teachers who helped mold our characters, direct our values and work ethics, guide our paths, and inspire us to become the best versions of ourselves.  For me, that teacher, bar none, was Dean Bernardo or Dean JunBer as he was fondly called.

Our first meeting was serendipitous and thesis was something that bound us together. It was summer in my junior year at UP doing thesis research for my Economics degree when, by sheer fate, Dean JunBer hired me as Faculty Secretary.  To cut a long story short, he became my first ever boss and though short the stint was, am eternally grateful to him for his faith in hiring a young working student and the skills I honed under his tutelage.

As AIM’s Dean of Students, he first opened the doors for equal opportunities in education by ‘relaxing’ AIM’s tight admission policies for MBM students.  Under his helm, the three-year supervisory work experience as minimum background requirement to enter MBM program was reduced to one year, provided the applicant belonged to the upper ten percent of graduating class in college.  And that was how I got into AIM in 1977, when it rained Latin honors awardees among my batch MBM79 (three members had Summa Cum Laude laurels) and where over twenty successful applicants were female. It was also during his initial term as Dean that AIM offered Student Loans and an array of scholarships that benefited my future husband as a full scholarship beneficiary. At AIM, my original Thesis Adviser got hired by a reputable advertising agency midway into my research. The quest for a new thesis adviser led me to none other than Dean JunBer whose mentoring was remarkably worthy that my sponsoring company took interest and financed wholly my research study.

An engineer by profession and background, Dean JunBer was born to teach. An adept Bridge player, he maintained a Poker-face countenance wherein his lectures were not interjected with humor as ice breakers.  Rather, he delivered his Operations and Production Management lessons in a structured, concise, well-defined yet easy-to-understand as well as appreciate manner that his students long remember. He taught us the Input-Transforming Unit-Output framework, “Burred Panels” as a notable Case Method study and the Kepner-Tregoe technique in Problem Solving and Decision Making.  He used Wedding Planning as a PERT-CPM exercise that, truth to tell, my AIM classmate and I used on-point when we got married in December 1978.  It is hard not to be reminded of the renowned “Bernardo Model for Project Management” which I deem deserved to be patented.  He said that in one’s life, it is inevitable to manage a project which distinguishes the role of a Manager versus an ordinary employee.  Under his unique model, a manager only has three management concerns:  Problem to Solve, Decision to Make and Managing a Project, the last of which entailed the list of Things-to-Do.  Indeed, Dean JunBer’s pedagogical skills were nonpareil and his teaching standards so inspiring that my husband followed former’s footsteps and continues to teach exactly the same subjects of discipline (Operations Management and Quantitative Analysis) at the Ateneo Graduate School of Business.

Over the course of my professional life, I had the opportunity to pay it forward and give back to AIM when I became Vice President for Development overseeing the operations of the AIM Scientific Research Foundation.  By then, Dean JunBer and I have come full circle evolving into work colleagues in a prestigious institution which served as training ground of Asian managers. At one time, we both attended the Asia-Pacific Economic Cooperation Summit Meeting in Seoul, Korea as AIM’s official representatives for the Education Sector, an accomplishment I still hold in high esteem to this day.

To my First Boss and Professor who believed in me and influenced me to attain an MBM degree, who helped every step of the way in my ascent up the corporate ladder through valuable work and character references, and who wished for nothing but success in my life, saying Thank You will never be enough.  His exemplary life as a Quintessential Educator is perpetuated in the memories of his students, AIM co-faculty and stakeholders, as well as a multitude of trainees in the business and education sectors.