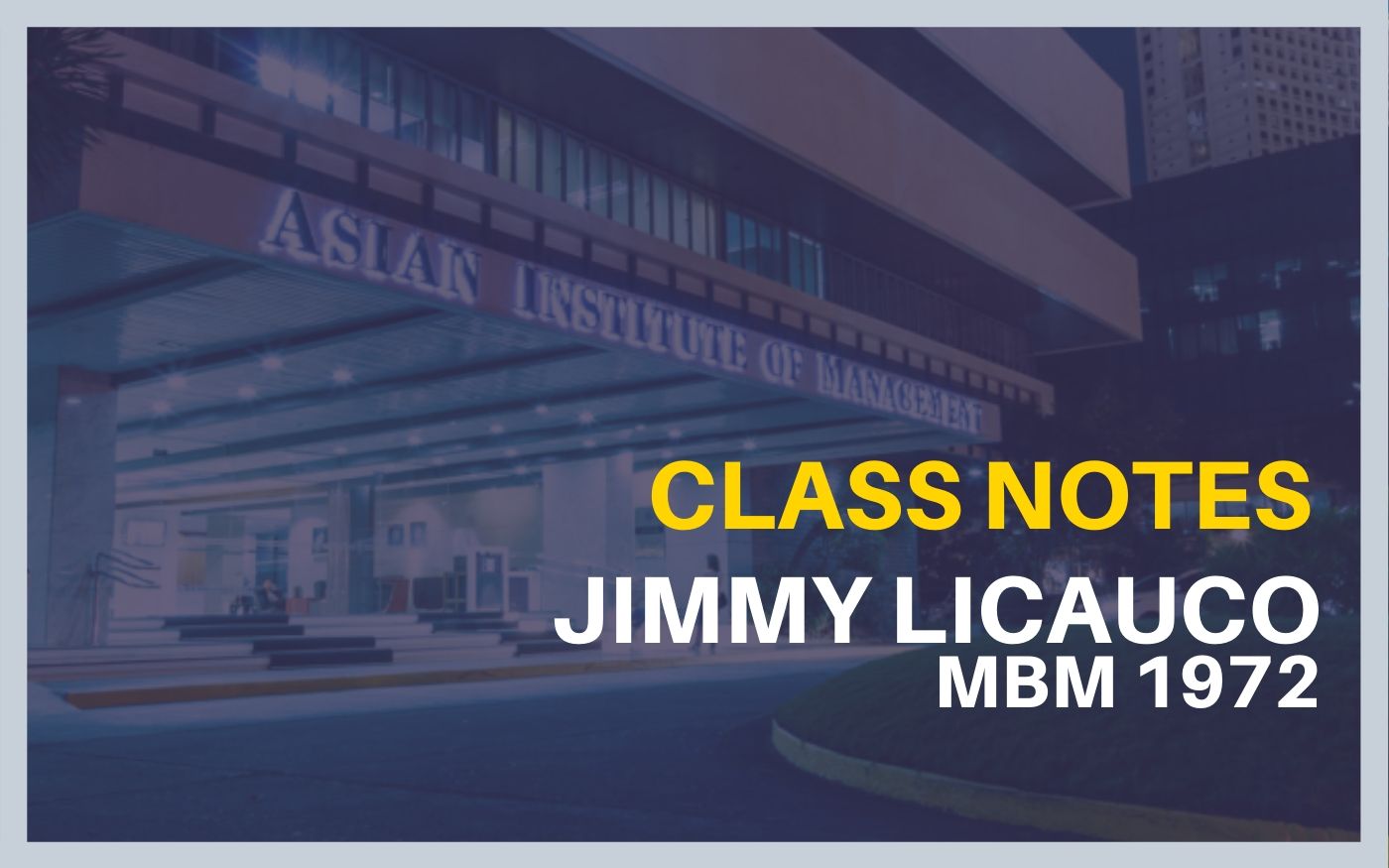 Trying to remember events that happened in a school ten years ago is like looking for old clothes to wear in a closet full of discarded mementos.  Some of those mementos had significant meaning; otherwise, they wouldn’t be in the closet at all. But most, alas, are best left unremembered.

What was it like in the early 70’s when about 180 Filipinos, Malaysians, Indians, Singaporeans, Japanese, Koreans and Pakistanis sweated it out in the newly built modern edifice called the Asian Institute of Management in the plush Makati in pursuit of that three-lettered degree (which sounded more like a four-letter word) which hopefully was to catapult us into the industrial  world?

Reminiscences like this are quite tricky, for they can unerringly reveal either one’s own follies and biases or his genius and intellectual honesty.  No two people witnessing the same event will describe it exactly the same way.

There were two things that immediately stood out in my mind when I recalled those two grueling years at AIM.  The first was the strong typhoon Yoling which mercilessly lashed at Manila with its more than 170 km. per hour winds, causing heavy damage and pandemonium in the growing Metropolis.  I recalled that all other schools had suspended classes except AIM because, according to the Administration, we were not covered by the then Department of Education rules on suspension of classes.  So, case discussions continued while Yoling growled outside.  It was already too late when classes were finally dismissed.  The students were caught by the heaviest portion of the typhoon as they went home.  I was lucky to have reached my place without a scratch.  The other incident that came to my mind at that time was when we witnessed several bank robbers mercilessly gunned down in their cars by the Metrocom and the police in front of the AIM building.  By the time the shooting stopped, at least two men lay dead inside their bullet-ridden get-away cars.

These definitely are not very pleasant memories.  But life is not a bed of roses all the time, especially at A.I.M.

I recalled the first year of our study to be no better than being in hell.  We spent sleepless nights trying to finish voluminous reading assignments.  Sleeping at 2:00 A.M. was not uncommon for most of us.

The almost inhuman pressures the faculty placed us in at the time exacted a heavy toll in terms of the mental health and well-being of some students.  One foreign student in fact had a nervous breakdown because of it and several others voluntarily quit after spending so much money and effort trying to get accepted.

Despite these incidents, very little attempt was made to help students cope with the new situation they found themselves in.  This was rationalized by the administration and the faculty by saying that business life is tough and merciless, that they were merely exposing the students to the realities of corporate life which was heartless and completely devoid of human feeling or emotion.  So we had better get used to it.  If we can’t make it through the first year, we will never make it in a corporate setting.  So we were told – and they were probably right.  Everything must be sacrificed to the gods of efficiency, rate of return and sales turnover.

A.I.M at that time was groping for direction and an image.  About 75% to 85% of the cases we studied were American, mostly from the venerable Harvard Business School.  I was one of the most vocal critics of the heavily western orientation of the school.  I used to call it the American Institute of Management.  That was the time when we knew more about General Motors than Sarao’s jeepneys, more about John D. Rockefeller than about Jose Soriano and Enrique Zobel, more about the behavior of the dollar than the Philippine peso.

Fortunately, times have changed.  The school administration soon realized that they were not in New York but in Manila, that they were not teaching Americans but Filipinos, Malaysians, Indians and Thai who have entirely different cultural backgrounds and therefore learning styles.  Ten years later, so I was told, there are now more Asian than American cases being assigned to students to study.  That was indeed a long time to Asianize the Asian Institute of Management.

I remember the discussion we had on the Asian Manager in our business policy class under Dr. Gaston Ortigas.  The question that was posed was whether there was any distinction between an Asian Manager and an American or Western Manager.  Many said that there was no real difference between them, that both types are engaged in the management of scarce resources and their behavior

pattern will be the same, given the same objective. In fact they supported the arguments by citing studies in Latin America and India showing the behavior of managers to be basically the same wherever they are.

I thought otherwise, I think there is a big difference between an Asian and a Western Manager. And when I was asked what an Asian manager was, I simply answered, “He is not Western.” Everybody laughed at the answer I gave, except Professor Ortigas. He alone knew what I meant when I said that an Asian Manager is not Western. At that time, I could not articulate the difference, but I know now. The Asian manager has a soul and spiritual outlook. This is his distinctive feature which is often lacking in the Western Manager. Because of this, their attitude and behavior will have some basic difference, no matter how it may be hidden from the standpoint of his external behavior alone, which is superficial.

I recall that there were two distinct groups of students at that time. The more predominant were the younger, inexperienced MBM students who have just graduated from college. They were mostly brilliant scholarly types, articulate and aggressive.

The other group was composed of the older students who have had years of experience in corporate life. Their solutions to case problem were born out of their experience and not through book learning.

Both groups I think learned a lot from each other. The older, more experienced students learned how to study again and how to use their books, while the younger one learned what it meant to struggle and compromise in the daily corporate life.

There were light moments, too. I remembered that was the time when the original “bomba” files became very popular. And when such films were banned in Manila, students in AIM would go to the nearby Laguna province where these would be shown uncut. So every time a boring subject was scheduled, students would suddenly disappear from class only to materialize in Laguna to watch “bomba” films. Our Malaysian and other Asian student were found to be as fond of these shows as the Filipinos were. There was a time when we knew more about the vital statistics of Alona Alegre and Rosanna Ortiz than the gross national product of the Philippines.

So, ten years after graduating from AIM what have we got to show the expectant world? Some have become top business executives in very big firms. Other went on their own. Still others went to government service.

I for one stayed in corporate life and produces three best selling books. Another book is scheduled to be released a few months from now. But please don’t ask me for the titles. For they are literally out of this world, and AIM absolutely had nothing to do with it.

Here’s the original text in photos: