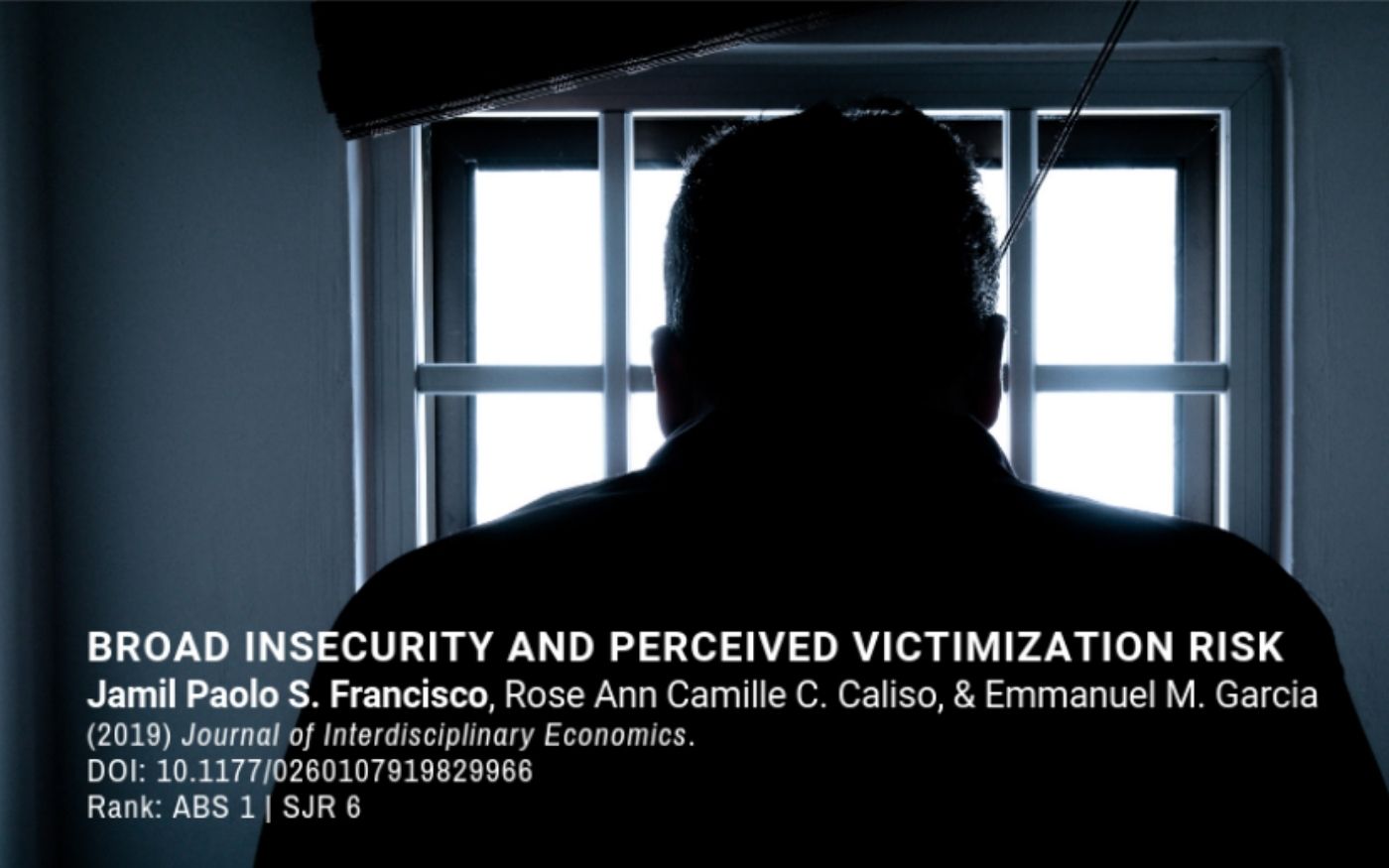 One of the cornerstones of the current Philippine government administration’s domestic policies is fostering a more secured and safer environment for the Filipino people using heightened and tougher policing programs to combat various criminal activities. While there has been a reported decline in index crime rates supposedly due to the administration’s aggressive anti-crime programs, this does not necessarily mean that the Filipinos are less fearful of crimes and/or that their perception of becoming a victim in the future has also decreased. Fear of crime and perceived risk of criminal victimization, intuitively, are rooted in personal vulnerability and past victimization experience. However, these can also stem from certain socioeconomic and political forces. Against this background, this paper investigated the perceptions of victimization risk among the Filipinos and the rise of “peace and order” concerns in the public consciousness. In particular, we examined the role of socioeconomic and political forces which potentially influence the fear of crime among and perceived victimization risk of the Filipino people. The study used the crime perception survey data from 1,200 households in Metro Manila across 17 component-municipalities, conducted by the Asian Institute of Management Rizalino S. Navarro Policy Center for Competitiveness (AIM RSN PCC) in 2016, to test the hypothesis that perceived risk of victimization may be predicted by perceived level of insecurity toward certain socioeconomic and political aspects which relate to the overall quality of life. In this paper, the term broad insecurity was used to operationally measure the perceived insecurity level of the respondents on the socioeconomic and political aspects which comprise their overall well-being. Broad insecurity, also called diffuse anxiety in the academic literature, refers to the general feeling of insecurity or malaise resulting from indefinite but interacting stimuli in one’s environment. In particular, our paper captured broad insecurity by measuring perceived level of insecurity on the following seven socioeconomic and political dimensions: employment, educational opportunities for children, health, sanitation and environment, financial stability, disaster preparedness and protection of human rights. To empirically probe how broad insecurity on these several socioeconomic and political dimensions influence fear of crime and perceived victimization risk, multivariate regression was employed. Our results showed that broad insecurity significantly affects the perceived risk of victimization or cognitive fear of crime. Specifically, broad insecurity increases the perceived risk of criminal victimization triggering an increase in fear of crime among the respondents, even as communities have become generally safer. Those who felt unsafe and at risk of being a victim of crime in the near future registered higher levels of perceived insecurity toward their financial well-being, employment status, preparedness for disasters and/or natural calamities, health status, environment, and the protection of their human rights. In addition, they are also more concerned about neighborhood incivilities and community problems such as garbage, juvenile delinquency, and using/selling of illegal drugs. Other reliable predictors which were included in the paper’s econometric model are past victimization experience, local government spending and social identifiers such as age and gender, but none was as strong as broad insecurity.

The strength and significance of broad insecurity on several fronts as a predictor of perceived victimization risk suggested that this perceived risk may have served as a repository and expression of anxiety, fear, and anger about a number of other concerns in daily life that people worry about. This paper corroborates budding research on the diffuse sources of fear of crime and victimization. It informs political and economic prioritization in pursuit of social harmony and development amidst a rapidly changing socioeconomic and political landscape. The findings of our paper suggest that security is a multifaceted matter. Addressing crime, taming the cognitive fear of crime, and fostering a more positive perception toward public safety requires more than just implementing tough policing and anti-crime programs. The government must also increase its focus on tackling the socioeconomic and political concerns of the Filipino people since perceived insecurities in these socioeconomic and political dimensions on the overall quality of life affect the prevailing feeling of unease among the Filipino people on their general safety. A holistic approach which tackles economic opportunities, builds human capital development, and creates physical and social infrastructure, alongside the administration’s ardent anti-crime policies, is recommended to be implemented.

The Journal of Interdisciplinary Economics is a forum in which those who wish to expand the boundaries of economic science are invited to contribute research that seeks out the hidden assumptions that determine the economist’s current world view, relax them and so evolve a new discipline more appropriate to the contemporary global environment, thereby enabling economists to tackle problems that have been created within that environment. The Journal of Interdisciplinary Economics is a peer-reviewed bi-annual journal which publishes papers and comments from academicians and practitioners on topics that focus from an interdisciplinary perspective, on neglected boundary areas, hidden assumptions, and axioms in economics that may not be self-evident. Papers and comments are also welcome in response to the papers and comments.