Market Power at the Seattle-Tacoma International Airport: The Case of Alaska Airlines 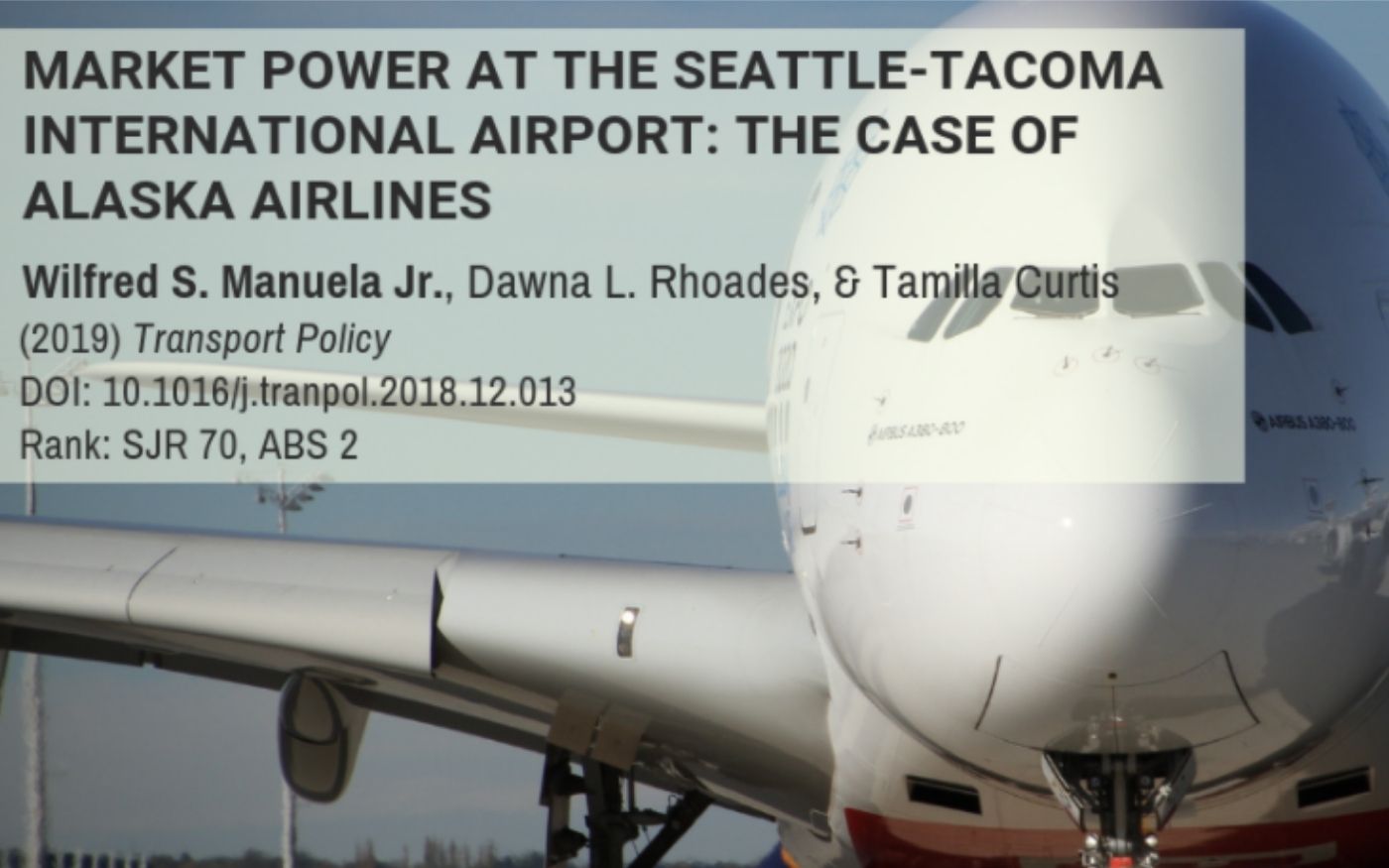 Market power allows firms to charge higher prices and in most cases these prices are substantially higher than marginal costs, resulting in profit margins above the competitive level. Airport dominance tends to confer several advantages to airlines including the ability to attract more customers, extract a price premium from certain classes of customers, and recover costs under conditions of congested infrastructure. Dominance at the route level also confers advantages while service quality such as flight frequency may allow dominant carriers in certain markets to charge higher prices. The question of what factors confer market power has obvious implications for policymakers. The answer may also influence airline strategy in various markets, especially on routes that originate from hub airports.

We analyze the impact of Delta Air Lines’ expansion in the Pacific Northwest, specifically at the Seattle-Tacoma International Airport (SeaTac), on Alaska Airlines’ operational and financial performance as well as the shift in market power, if any, at SeaTac. We extend the literature on airline market power by analyzing the aggressive expansion of a much larger full-service airline at an airport hub dominated by a comparatively smaller regional airline, resulting in the termination of their codeshare agreement and frequent flyer partnership and its impact on the regional airline’s market power using industry and firm-level variables in the early stages of their rivalry.

We use the Lerner index and the Herfindahl-Hirschman index (HHI) to assess market power at SeaTac. The Lerner index is the ratio of a firm’s profit margin to its price, which shows the ability of the firm to increase its price above marginal cost. The Lerner index will also increase even when prices are stable or slightly decreasing, due to intense competition, if costs decrease faster relative to the decrease in airfares. We estimated Alaska Airlines’ average “marginal cost” using operating cost per passenger revenue mile and estimated its “price” or average fare using passenger revenue per revenue passenger mile. Our analysis is at the airline level and computed the Lerner index for Alaska Airlines. Our ‘industry’ consists of all flights originating from and terminating at SeaTac and computed the HHI, a measure of industry concentration, at SeaTac.

We estimated the two equations (profit and Lerner index ) in the econometric model simultaneously due to the endogeneity of the Lerner index variable in the profit equation using the generalized method of moments, using instrumental variables for the endogenous variables in the system of equations, based on the Newey-West covariance estimator. We also used the Sargan Test to assess the validity of the instruments used in the estimation.

The major results of this paper are that higher market concentration and advertising intensity result in lower profits. While these findings may be counterintuitive, we argue that market share stealing strategies tend to reduce profits, increasing competition in markets with high HHIs. This implies that policymakers should look beyond the HHI as an indication of market power because industries with few major firms that have high HHIs may be as competitive as industries with more firms and may behave closer to the competitive market structure when firms engage in aggressive advertising and related marketing strategies to fend off entry and competition or steal market shares from each other. The resulting excessive marketing activities increase advertising intensity to a level that outstrips the growth in revenues, which tends to reduce profits. Thus, policymakers’ assumption that highly concentrated industries are more likely to engage in collusive behavior, which may result in higher prices and capacity constraints, does not seem to apply to the airline industry. Moreover, the U.S. airline industry shows a history of intense price and non-price competition even as the industry consolidated and airlines built strong hubs. While the airline industry appears to have many of the features that lead to abnormally high economic profits, namely duopoly or oligopoly in certain markets, barriers to entry due to advertising and consumer inertia make the case for regulatory action to control and remedy high industry concentration rather weak. In the case of Alaska Airlines, its ability to maintain dominance at SeaTac despite escalating competition from Delta Air Lines appears to result from its increasing advertising intensity and departure frequency, which increase operating costs. Thus, policymakers should look beyond the number of industry competitors in examining market power because airlines may engage in non-price competition that reduce firm-level profits.

Another interesting finding of our study is that cost efficiency is better than pricing power, which allows firms to charge prices higher than the competition, in explaining the Lerner index. In the case of Alaska Airlines, unit cost is the major predictor of the Lerner index, which suggests that cost-efficient firms have more pricing flexibility than firms that simply charge higher prices. Lower costs and higher prices increase the Lerner index, so firms that can do both will enhance their market power—the ability to earn superior profits above their competitors. Thus, policymakers should not only consider higher prices and superior profits as indications of market power but also look at the firm’s cost structure because cost efficiency may be the major determinant of its higher than average profitability.

Transport Policy is an international refereed journal aimed at improving quality of transport policy and strategy analysis, designing and sharing innovative policy and management practices, and application bridging the gap between theory and practice in transport. Its subject areas reflect the concerns of policymakers in government, management strategists in industry, and the public at large, providing independent, original and rigorous analysis to understand how policy and strategy decisions have been made, monitor their effects, and suggest how they may be improved.