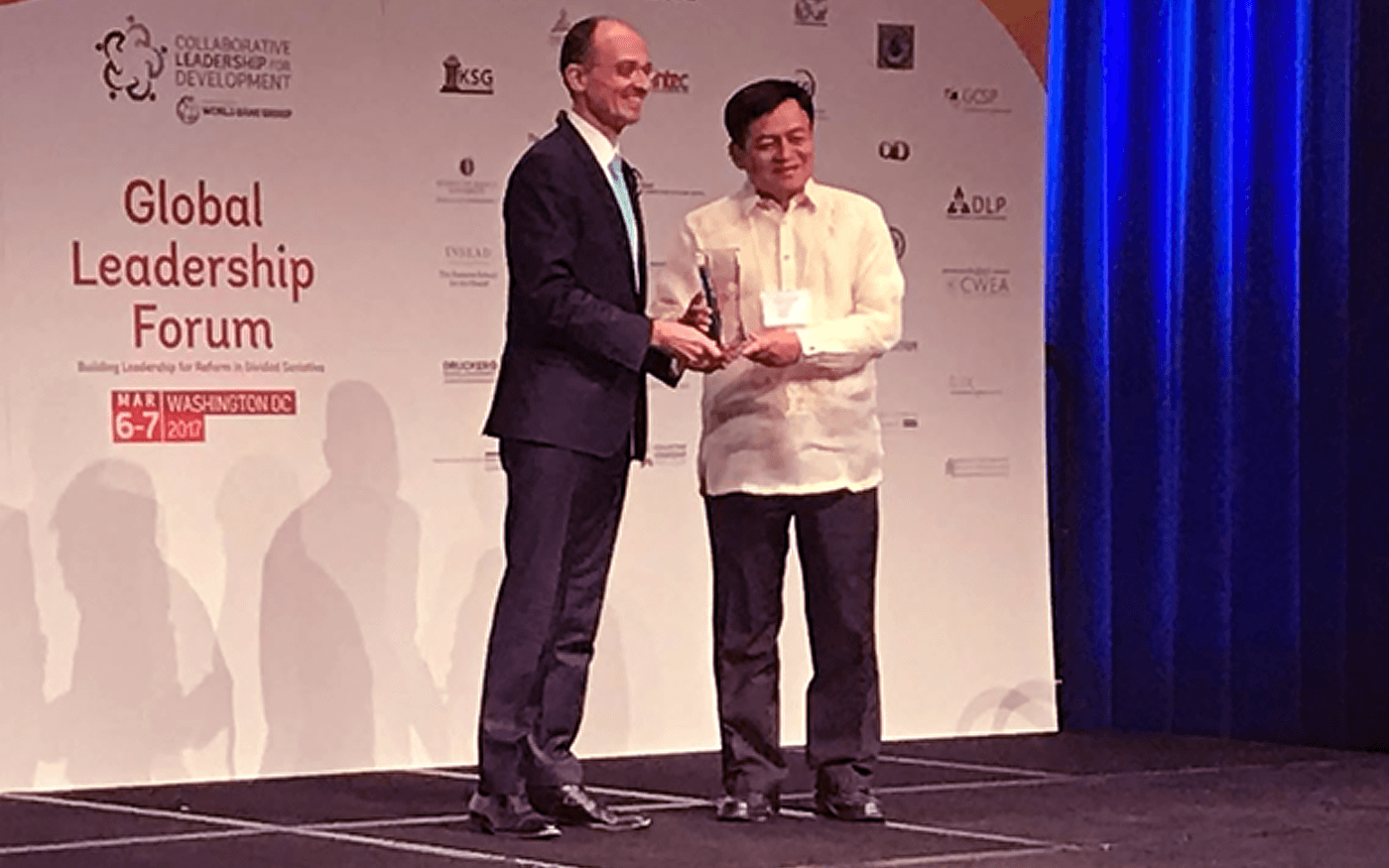 “If we’re not one with the people, if we’re too detached from our constituents, we will have a different perspective. Our commitment in serving the people then weakens. We need to go back to the people.”

Through people empowerment and applying collaborative leadership during his three terms as mayor, Pacalioga spearheaded the community’s shift towards sustainable organic agriculture, thereby lifting Dumingag from poverty and improving its local economy.

A landlocked town in Zamboanga del Sur, Mindanao, Dumingag has experienced intergenerational cycles of poverty. When Pacalioga became mayor in 2007, he realized that for change to happen, the Dumingagnons from the municipal to the community level should be involved in governance. Pacalioga built a coalition called the executive committee, which was comprised of municipal officials, and together they drafted an eight-point agenda called the Genuine Peoples’ Agenda (GPA) with the Transformative Education (TE) program at its core.

Targeting elementary and high school students, TE employed innovative learning methods such as adopting the indigenous practices of the Subanen people in training the community about organic agriculture. Through the project, the Dumingagnons were taught organic farming methods in keeping with Subanen culture. With the help of Dumingag’s teachers, both were eventually integrated in the school curricula, further strengthening the students’ knowledge and skills.

The project further gained momentum in 2012 when Pacalioga joined the Mindanao Bridging Leaders Program of the Asian Institute of Management’s Team Energy Center for Bridging Leadership. With deeper understanding of collaborative leadership, he refined his approach so that implementation of the TE program could more effectively reach his constituents.

Pacalioga and his co-leaders’ efforts resulted in raised farmer incomes and a sustainable local economy.  That same year, many farmers shifted from conventional to organic farming and formed cooperatives for production and marketing. In 2013, they sold several varieties of organic rice, which further contributed to Dumingag’s agricultural enterprises.

In line with his leadership philosophy, Pacalioga decided to partner with various local and international organizations. Of those that he approached, the International Federation of Organic Agriculture Movement, supported the project.

Pacalioga’s leadership and collective action has not only reaped success for Dumingag’s social situation but also recognition from various local and international award-giving bodies. The JECCL Lifetime award is only the latest of many accolades.

(I couldn’t believe it. I repeatedly asked…if it was true. I went home, I was at the airport, [I asked], why me?”)

(You’re more certain that the decisions are nearer to truth, the process is consultative because many are involved, [there are] many ideas. Many people discuss before coming to a certain decision.)

Pacalioga added that the consultative nature of collaboration allows fellow leaders to better learn and assess situations, making real engagement and empowerment not only possible but sustainable.

However, according to Pacalioga, collaborative leadership’s implementation is tested on four fronts: consolidation efforts in the grassroots, re-energizing leaders, institutionalization of systems, and diplomatic relations.

Based on his experience, every three years, participation declines. After the grassroots approach of the GPA, the political direction, and ways to improve the livelihood, there remains the need for continuous integration of  ideas and issues within the community.

(Because governance is discussed everyday, the leaders’ political awareness is raised. But not of the people in the community, whose discussions are usually about their livelihood. Not all programs that are brought to the community are excellent. The people need to be consulted, [we need to] go back [to them and ask], [if] the program is effective.)

To illustrate his point, Pacalioga shared that when they saw the crop produce reducing significantly yearly, they went back to the villages to talk to the community. It was only then that production once again increased.

He also mentioned that an important part of the re-consolidating process is re-energizing the leaders. An issue, for example, is the lack of skills of municipal officials. One way to address the problem is through the one-week training, which includes familiarization on the GPA, ideological formation, and integration into the community.

(Leaders are almost always inside their offices. Their view of the community is so far-off, that’s why they need to go to the community.)

Apart from these, the institutionalization of systems such as financial processes, and strengthening and choosing right partnerships are vigilantly worked on to steer Dumingag’s political direction towards sustaining the positive changes.

With their pioneering successes in local development, Pacalioga shared that their main direction for the coming years will involve the following: installation and creation of a bio-village, expansion of social enterprises, institutionalization of effective local government systems, and amplifying the collaborative leadership training of municipal officials.

Currently, Dumingag’s local government is focused on developing two projects with respect to the environment. The climate change project involves building schools in villages that educate the community on the proper practice of growing and producing a variety of crops based on the climate situation to optimize harvests. The creation of the bio-village, on the other hand, seeks to align the communities’ organic agriculture systems with biodiversity restoration, an important aspect unaccounted for during the initial implementation of the GPA. Dumingag has also expanded its strategic partnerships with the Philippine Permaculture Association and Agro-echo Philippines, who assist them with research.

However, despite the progress Dumingag has achieved, Pacalioga notes that there is still a lot to be done. “Ten years natayo [sagobyerno]. Sa Dumingag, [makikitamo pa rin] pictures of poverty. [‘Yan ang] inspiration to serve.”

(I have been [in the government] for ten years. In Dumingag, [you will still see] pictures of poverty. [That’s the] inspiration to serve.)

Accolades and awards aside, Pacalioga is determined to continue serving Dumingag for the rest of his life.