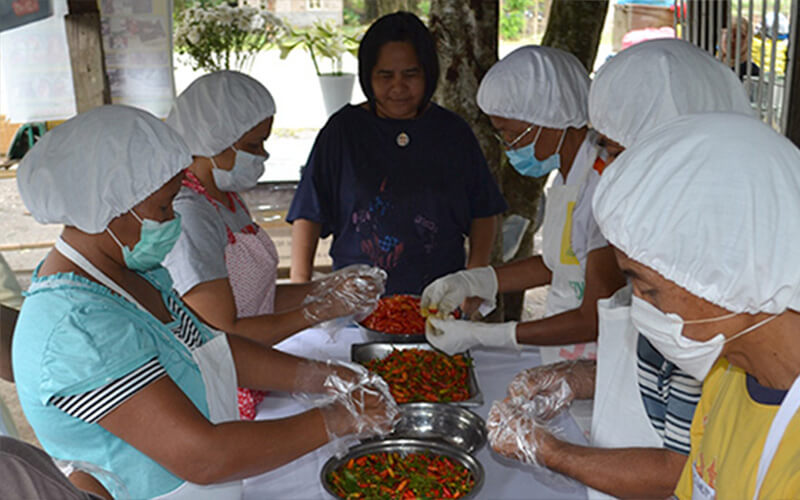 Vinegar is widely used for cooking, dip to meals, and medicinal purposes but, for the people of Saravia, vinegar has become a means for a progressive social enterprise which paved way to better income-generation and peace-building within their communities.

Historically plagued by poverty and armed conflict, Saravia is a village in Koronadal, South Cotabato, Mindanao inhabited by indigenous peoples namely the Blaans, Maguindanaons, and Ilonggos. The area is rich with natural resources, however, this abundance did not reflect in the peoples’ lives and the state of communities. The tribes co-existed in deep distrust until Luz Go, peace advocate and Mindanaon from General Santos City, saw an opening for change in the livelihood practice and communities’ interactions through building a vinegar enterprise.

Upon her immersion in Saravia, Go observed several differences between the three tribes. The Maguindanaons and Ilonggos were relatively living a better life, characterized by the capacity to eat three meals a day. Most Maguindanaons worked as farmers and laborers, while few served in the government and private agencies. Most Ilonggos worked in the government and private sector.

The Blaans who were mostly coconut farmers struggled in the provision of their daily needs, which also translated to having a low self-esteem. They often only eat two meals a day – cassava or banana and soup for the first meal and rice for dinner. “I could not stand it whenever people say they are almost always hungry, especially the Blaans,” Go reiterated in an article by Asian Institute of Management Team Energy Center (AIMTEC) for Bridging Leadership.

The three tribes were not always adverse to each other, however. They used to live harmoniously until conflict between Moro Blackshirts and Ilonggo Ilagas took place in the 1960s-1970s. The abandoned Memorandum of Agreement on Ancestral Domain further damaged the relationships, which led to a new armed struggle.

All of the indigenous peoples in Saravia were marginalized because of this situation – the Blaans being the most affected. Aside from the armed clashes between Blackshirts and Ilagas, the Blaans also experienced trauma from conflicts between the New People’s Army and the Armed Forces of the Philippines (AFP) in the 1980s-1990s, and the Moro National Liberation Front and the AFP in 2000-2003. The lack of trust among the tribes worsened their state.

Given the history among the communities, Go’s change project was heavily challenged. Apart from the tribes’ hostility, the farmers lacked proper training, skills, and resources to sustain and scale up the vinegar production. She also noticed that there was no quality control in the products. The tough local competition and the need for vinegar producers to source raw materials outside of the village added hurdles and costs. Additionally, the Maguindanaons and the Blaans did not have farmers’ associations, which limited their capacity to bid for better product prices.

Go also mentioned the disparity between the farmers’ and vendors’ earnings. She quipped, “Though everyone belongs to the same vinegar industry, how come one sector earns more than the other? We have poverty and shortage of food in the rural area because producers of raw materials do not have equitable economic share. It is this issue that the project aims to address – people have to start being concerned of others, especially those who belong to the same industry.”

With these various issues, Go acknowledged the need for dialogue to resolve internal conflicts and find the intersecting points for the Blaans, Maguindanaons, and Ilonggos to work together. Her mission was two-fold:  Make the vinegar enterprise as a means for peace and community development, especially for the Blaans.

The efforts of the tribes, Go, and partner organizations led to the residents of Saravia having a change of heart and mind. The Blaans, Maguindanaons, and Ilonggos developed a deep sense of ownership for the project, which was eventually formalized through having a manual of systems and procedures. Additional trainings and meetings were conducted which improved the skills and interactions of the communities, respectively.

Go’s approach to the project and the people was founded on a collaborative philosophy. She realized, “[Leadership is] sharing the vision and influencing others to participate and to create a desired future together.”

She formerly believed that leadership is about guiding people towards set goals under a leader’s vision until she joined the Mindanao Bridging Leaders Program (MBLP) in 2011. And through which she developed a mindset and practice to be more proficient with managing projects involving the community.

Bridging Leadership (BL) is a leadership approach which aims to understand complex issues and address social divides through three major elements: deepening ownership of an issue, building co-ownership of the issue with stakeholders, and mobilizing stakeholders into collaborative action for co-creation of a new reality. It originated from a global research project of the Synergos Institute, a global nonprofit organization headquartered in New York City. The BL program was launched with the Asian Institute of Management (AIM) as its partner in 1999. Today, the AIM through AIMTEC for Bridging Leadership continues to rally the advocacy through extensive research and training programs.

In her mission to leave a peaceful Mindanao as a legacy to her children, Go applied the principles of BL in building the vinegar business of Saravia. Through immersion and continued interaction with the people, she deepened her awareness and understanding of Saravia’s history and context as well as her ownership of the issue. Go furthered her commitment in resolving the conflict by initiating dialogue among the tribes for them to co-own the problems they are facing as a community until she convinced them to work together and co-create the vision of peace and development for Saravia and its people.

As Go shared in the same article, “Development cannot happen without the people acting as the prime mover – I only act as the facilitator.”

Saravia’s vinegar industry, a traditional livelihood among the community, has progressed monumentally by providing the families a 50% increase in their monthly income from PhP 1, 500.00 to PhP 3,000.00. The former inequitable sharing of profit between farmers and vendors and not well-represented sectors in their long-going vinegar associations have been transformed.  This change has enabled the people of Saravia, especially the Blaans, to have more savings and better access to essential needs.

Go believes that having a stable source of income is crucial for peace in a community. More so, peace is achieved when communities have a change in mindset – in the case of Saravia, from a to-each-his-own mentality to working and sharing their resources to achieve a common goal. As one of the members said, “Hindi kami lalaki kung kami lang (We couldn’t grow our business on our own).”

This has been translated into their roles in the vinegar industry with the Blaans extracting the coconut sap, Maguindanaons growing chili and langkawas, and Ilonggos producing tuba and fermenting the vinegar for purchase. The communities’ patience and hard work has resulted to their vinegar products having uniform prices for wholesale and retails sales, systems for quality checks, and product stamps with Saravia Seal of Excellence and Quality for distribution. They also have an increase in demand for natural food products which means more work and collaboration.

With their challenging and growing vinegar enterprise, Saravia looks forward to a sustainable and progressive future while continually working towards peace and development of their people and communities – even through the simplest of things such as vinegar – for the present and the generations to come.